Occult Meaning of Mercury – This Planet in Ancient and Occult Writings

In this post, I have gathered important occult and astrological writings about Mercury for easier personal reference and hopefully, this will be useful for some of my readers as well.

Mercury was known in ancient days under the names of Hermes, Hermaon, Thoth, Stilbon, Taaut, Cyllenius, Hermes Trismegistus, and Archas. It’s the closest planet to the Sun, and it never gets away from it by more than 27 degrees.

When it’s too close to the Sun, within the range of four degrees when the person is born, the native may experience some mental blind spots, inconsistencies in logic, and similar mental difficulties. I’ve also found that combust Mercury (it being too close to the Sun and thus burnt by it) may cause poor memory.

However, if it’s perfectly aligned with the Sun, this produces a powerful intellect and the person could be a genius.

When Mercury is retrograde when the person is born, he may be able to better develop his intellectual faculties later in life as opposed to when most people have them developed.

William Lilly writes this planet to be of dusky silver color, and its mean motion to be 59 minutes and 8 seconds. Mercury is stationary one day, and retrograde 24 days.

Mercury rules Gemini and Virgo; Gemini is ruled by Mercury in its positive aspect, whilst Virgo – in its negative. This means that although people born under both zodiac signs are intellectual, Virgo will be more negative and materialistic, whilst Gemini – more positive, hopeful, and mental.

This planet is exalted in the fifteen degrees of Virgo. Its detriment is in Sagittarius, and its fall – in Pisces.

It’s neither male nor female, and if it’s found close to other planets in a natal chart, it tends to take on their qualities, thus strengthening them. When it’s joined with a feminine planet, it becomes feminine, and vice versa. Its own nature is cold and dry and tends toward sadness. With good planets it becomes good, and with evil – evil.

According to Vedic astrology, however, Mercury is benefic when not in conjunction with any planets.

Mercury rules the airy triplicity (Gemini, Libra, and Aquarius) at night. Its colors are silver, grey mixed with light blue, and many colors mixed in one, as in some fabrics. In Vedic astrology, it represents the color green.

It has a seven-degree orb. It governs the sixth month of conception.

Mercury’s day is Wednesday, and it rules the first and eighth astrological hours of that day. It is friendly with Jupiter, Venus, and Saturn. Its enemies are all the other planets with the exception of Uranus. Uranus is its higher octave.

Caduceus – the staff of Hermes (Mercury)

It’s Mercury (Hermes) that is shown carrying the caduceus.

The caduceus is sometimes mixed with the staff of Asclepius (the ancient Greek god of medicine) that has only one snake on a stick.

The meaning of Hermes’ stick with two snakes intertwined was originally that of peace, as he separated two fighting snakes with a stick, and then they wound themselves around his wand.

If it’s crooked, a person can be a liar and unfair in business dealings.

The more crooked the finger is, the more dishonest the person will be.

If it’s only slightly crooked, it could be that the person simply exaggerates things sometimes, or doesn’t say certain things in order not to hurt someone’s feelings, for example.

If it’s very low set, it could mean that the person needs to struggle in order to earn a living; this is what palmistry books say, but I did not find this the case sometimes.

Mercury also rules the mount under the little finger. This mount, if it has vertical lines on it, may indicate that the person has healing abilities and therefore could become a doctor. A well-developed mount of Mercury makes the person intelligent, street-smart, and good in business, like in selling, for example. 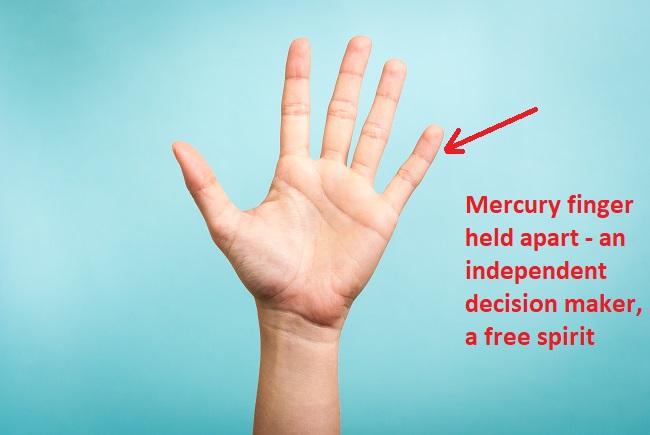 Mental characteristics of a person born under the rule of Mercury

Mercurial people are very adaptable and clever, but they can either be good or bad. That’s unlike, for example, people ruled by Jupiter or the Sun, who tend to be good. But when it comes to Mercury, people ruled by it can be experts in professional fields, or they can use their intelligence for evil, and, for example, become high-class thieves almost impossible to catch.

Also, Mercury represents the intelligence of youth that’s yet without compassion, whilst Saturn represents the wisdom of old age, for example. So some people ruled by Mercury may lack the heart, so to speak, and can be deceptive and very street-smart. However, this planet can produce excellent writers, doctors, communicators, sales, and business people in general, thus these people would benefit if they increase the vibration of Mercury in their lives.

Mercury produces people who are very logical. They can be way ahead of othersintelligence-wise. Their minds are quick, and they can be excellent diplomats. They win debates and sway the public with their reason; their speech is eloquent, and they are always involved in some sort of research, be it occult, some higher education project, or anything else that makes them smarter.

In fact, the planet Mercury is highly related to divination and alchemy, and it’s the god Mercury who is told to lead people after their deaths into the afterlife, thus being represented as a messenger between the dead and alive.

A person ruled by Mercury is sharp and full of wit. He is self-taught and he usually finds traditional learning too slow and limited – he is capable of learning much faster and deeper on his own than were he to attend ordinary classroom-style lessons. Whenever he’s interested in something, he will strive to become the master of that field.

He loves movement, and it’s hard for him to stay in one place for a long time. He may be into sports, driving, flying – using any means of transport, actually, and the faster, the better. He loves traveling. He loves mental stimulation and is great with hands – he can either fix things, or he can make something beautiful with his hands, like something creative, for example.

He is busy researching various aspects of life and tries to escape boredom as he cannot tolerate it. He’s always doing something. Sometimes his need for mental stimulation makes him look fickle, and sometimes he may be involved in two things at the same time due to the deep need for mental stimulation. So, for example, Mercurial people sometimes get involved in two love affairs or have two careers.

He is usually interested in secret knowledge. He masters some field of knowledge and then uses it in an ingenious way to his own advantage. If he’s interested in legal matters, he will find all the loopholes to exploit. If he’s a seller, he will get wealthy through his ability to read the needs of customers and make money in inventive ways. If he’s a researcher into the occult, he will produce detailed books of extraordinary quality information.

He is so mentally advanced that he can succeed in any sort of career. Mercurial people attract admiration and love anywhere they go, even if their appearance is not impressive. They win hearts by their intelligence, speech, and charm. Their interests are varied so they know about many subjects, making them fascinating conversationalists.

However, if Mercury is afflicted in one’s chart, especially by Saturn, it produces people who use their intelligence for evil. They might appear as role-models of society, yet they might be engaged in things illegal at the same time. But because they are so smart, nobody can figure out their evil-doings.

Such a placement can also produce people who are in the habit of lying or talking behind the backs of others. They may try to get secrets out of people and then use that information against them.

A bad Mercurian may become a friend of those he wants to use, and then somehow find out how to get the advantage of those people through gathering information about them. Also, bad Mercurians can be boasters, vain talkers, black magicians, extremely fickle, saying one thing yet doing another, cheating every person they can, and pretending to have all sorts of knowledge.

Physical characteristics of a person born under the rule of Mercury

People ruled by Mercury have long arms and long hands with thin, long fingers. They might look androgynous. Their eyes could be perfectly shaped – the lower and upper parts being of an identical shape. Here is what I mean:

The eye of a Mercurial person

He is tall and thin. Some astrology books say that Mercury produces people of short stature, but my experience disagrees with that. What I found is that Mercurians are likely to be taller than their parents, and the same applies to those who ruled by Uranus, who could be very tall. (Uranus is a higher octave of Mercury.)

His lower extremities could be long also, from hips to toes. He may have what is called in palmistry a philosophical type of hand, with well-developed knots and with a long finger of Mercury as well as a prominent mount of Mercury or the mount with vertical lines on it. The forehead is high, the face is long and narrow, the chin may be very pointed and long. The nose may be long too, and thin. The upper lip may protrude somewhat.

Mercurians remain looking young till very late in life and it’s hard to tell their age.

Men have little hair on their chins and much on their heads. The complexion is of either olive or chestnut color. But it’s very difficult to find a pure Mercurian, simply because it takes on the qualities of any nearby planets.

What Mercury represents in astrology

Mercury also represents swiftness, intelligence, movement, arbitration, media, versatility, quick-wits; it represents an early part of any event inquired about in horary astrology; it can also represent tricksters and other dishonest people.

Diseases and imbalances caused by Mercury

Mercury rules arms, hands, lungs, nervous system, digestive system, intestines, and spleen. It, together with the Moon, is especially responsible for nervous imbalances.

If it’s found in the eighth house in one’s natal chart and it’s negatively aspected by malefics, it can indicate that the person may become insane before death. If some malefic aspects Mercury from the twelfth house, it may mean that the person will end up in a mental institution.

It is also responsible for vertigo, lethargy, dizziness, brain diseases, speech impediments, daydreaming sometimes (the Moon can be the culprit as well), memory defects, coughs, changes in voice. According to Vedic astrology, Mercury also is responsible for epilepsy.

Herbs and trees ruled by Mercury

Herbs ruled by Mercury have flowers of various colors. They grow in sandy places and have their seeds in husks or cobs. They either don’t smell or the smell is faint. They usually heal the throat, tongue, brain or lungs, and improve memory. They dispel vata dosha (the wind part of the body elements) and clear obstructions in the body, thus are of a detoxifying nature.

Here are some of the herbs and trees ruled by Mercury:

Metals and stones ruled by Mercury

This is all the information I have for you about Mercury. If you wish to share something more about this planet, please do so in the comments.

Occult Meaning of Mars – This Planet in Ancient and Occult Writings

Occult Meaning of Venus – This Planet in Ancient and Occult Writings

Occult Significance of Saturn – This Planet in Ancient and Occult Writings