In this post, I have gathered important occult and astrological writings about the Sun, for easier personal reference (as everything on this planet will be on this page) and hopefully, this is going to be useful for some of my readers as well.

General occult and astrological information about the Sun

According to medieval astrology, the Sun is placed in the middle of all the planets, since they did not have any information about Pluto, Neptune, and Uranus. 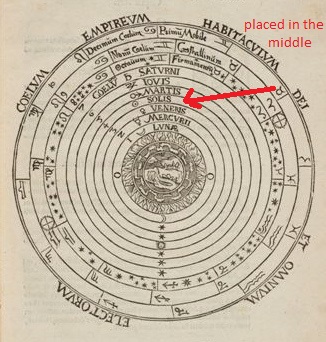 The medieval conception of planetary order

Ancients called the Sun Sol, Helios, Phoebus, Apollo, and Ra. He passes through all the zodiac signs in one year and his mean motion is 59 minutes and 8 seconds, according to William Lilly, the most famous astrologer of the seventeenth century.

He is never retrograde but his movements are not always the same – he sometimes moves more slowly than at other times. His nature is hot and dry, but more moderate than that of Mars. It’s a masculine luminary and if well dignified in a natal chart, he usually bestows wealth.

The orb of the Sun is 15 degrees, so any planet in the astral chart within fifteen degrees of the Sun is told to be in conjunction with the Sun. Planets too close to the Sun are called combust – they are burnt or provoked by the Sun, and this usually produces negative results. For example, often Mercury is burnt by the Sun as he’s never too far from it, which may produce a lack of concentration, bad memory, and an inability to think the subject through in a native.

Blavatsky writes that there are seven suns, each on its own plane of existence, and that they all emanate from the Central Sun (the way that I understand her writings) and that the Central Sun is the center of universal life-electricity within which divine radiance is focused.

She writes that in ancient symbolism it was the Sun who sent out saviors and avatars into the world. (All references are at the end of this post.) We also know that Jesus is often depicted as the Sun, especially in Roman Catholic symbolism.

Blavatsky writes that it is from the Sun that saviors come to the world.

Paracelsus writes that in the center of the Sun there is astral gold and that the Sun gives of it through its rays to all beings. It penetrates all things sentient.

The Sun rules the ring finger and its mount, which is called the finger of Apollo.

By the examination of this finger and mount one can judge a person’s prospects to become successful or famous, as well as his creative abilities.

It shows whether the person appreciates beauty and whether he’s skilled in literature. Wealth prospects are indicated by the finger and the mount too.

It can show mental brilliancy. A good finger and mount make the person artistic and lovable. An overdeveloped mount shows the person to be proud and arrogant, and suffering from vanity.

A depressed mount shows a lack of any artistic skill and refinement (that is modified by the lines on it, however). The amount of success and whether the person is interested in many things or only in a few can be read from this mount as well.

Cheiro writes that you can judge how much luck the person will have in life by the line of the Sun on the palm. If it’s a well-marked sun line, even a person possessing a bad head line will have success.

People who have this line appear to have more magnetism and more influence over others. It’s even possible to tell when the person will have success in life by looking at the length and the location of the sun line. For example, a short sun line starting from its own mount means that success will come very late in life, and the one starting from the line of heart shows that success will again come later in life, but not as late as in the case just described.

People who have the sun line will more easily achieve recognition, reward, riches, and honors. They also will have a happier disposition than most people.

A person who is largely ruled by the Sun will have the following characteristics.

He is very faithful and keeps his promises. There is a desire in him to rule and to influence the masses wherever he is. He is thoughtful about the future and possesses good judgment. He is majestic and stately and works hard to acquire honor and wealth.

He is above any under-hand tactics and despises such traits in others. When he speaks he is often serious and uses few words. His speech is confident and masterful. He is thoughtful, trustworthy, and uses speech for some definite purpose rather than for some shallow talk or gossip.

He has a generous heart and is compassionate. He is magnificent and honorable, and no immoral thoughts enter his mind. He is honest and sincere and holds good and noble thoughts in his mind.

He is very intelligent and has a great taste in the arts. He is idealistic and may lack practicality, but through luck, he becomes as successful as those who are more practical. Because of the favorable influence of the Sun, anything he undertakes usually becomes successful.

He is lucky in gambling activities and if he listens to his intuitions he can prosper solely through them. He is naturally a charming individual so usually by the public demand he gets a high position in life.

His negative qualities are these: he is very selfish but he isn’t consciously so; so sometimes he is not constant in his affections. Therefore, people who love him sometimes are heart-broken due to this inconstancy. He is not shrewd in business and may be taken advantage of through flattery, as he likes to listen to compliments, and then his guard goes down. If he realizes these week points and corrects them, his future will be excellent.

When the Sun is ill-dignified in a natal chart, it makes the solar person arrogant and proud, he despises people and is satisfied with himself for no reason. It makes him bad in making a judgment, rebellious, troublesome, a show-off, domineering, a spendthrift, and foolish; his words hold no power, his actions do not spring from much thought.

He wastes inheritance and is likely to become dependent on the charity of others and use them for money, yet he will think himself doing them a favor with his mere presence in their lives.

The body of a solar person is usually strong, well-formed and he has a large frame. He is of medium stature. His complexion is yellow or saffron. The forehead is round and large.

His hair is usually fair and the chin is round and firm. Teeth are regular and may be of a yellow tint. Big, bulging eyes are very common; they can be sharp and piercing. The body is not necessarily beautiful but it looks full of health.

Solar men are likely to become bold quite fast but their beards usually remain thick. Solar women may also experience some hair loss with age. Ruddy complexion is usual. The body leans towards chubbiness rather than leanness.

What the Sun represents in astrology and diseases caused by it

In horary astrology, the Sun signifies celebrities, judges, city governors, bosses, presidents, and other high-rank people. It could signify honorable and respected people or the ones that are most esteemed by the community. It could also signify people working with gold, those who work with money or who aspire to be famous.

Plants, animals, places, and metals ruled by the Sun

Plants that are ruled by the Sun, according to William Lilly, smell nice and are of good flavor and the flowers are yellow or reddish. The plants are of a beautiful shape. Such plants love to grow in places that receive plenty of sunshine.

Consumption of them principally strengthens the heart, revitalizes the body, improves eyesight, and resists poison, witchcraft, and malignant planetary influences.

William Lilly lists these plants as ruled by the Sun:

Trees ruled by the Sun:

Mammals and worms ruled by the Sun

Fish ruled by the Sun

Birds ruled by the Sun

Places ruled by the Sun

Elements, metals, and stones ruled by the Sun

More information about the rulership of the Sun

The Sun is told to rule people when they are at their strongest.

The Sun rules Sunday and its first and eighth astrological hours. It rules the numbers one and four. It is told to rule the fourth month of pregnancy. The friends of the Sun are all the planets except Saturn.

The Sun according to Vedic astrology

The sun is told to be the soul of everything, the vitality which enables all to exist. It is the sovereign according to Hindu astrological writings – which means that it represents people in power, such as kings or political leaders. It stands for the age of fifty years in Hindu astrology.

Its color is copper and it rules the stone ruby. It’s a male planet and may indicate the birth of a boy if it’s somehow related to the fifth house. It also relates to the bones in the human body, because bones provide the structure for the body, and without the Sun nothing would exist – this is the logic behind it representing bones in Vedic astrology.

If it’s high up in the sky when the person is born, it’s the most favorable position for the Sun. It is told to be a fixed principle in opposition to a volatile principle that’s the Moon. It represents the father, bravery, and wealth, which is the same as in western astrology.

It represents the humor called bile. People ruled by this planet have little hair on their body due to the heat of it, and this luminary is sattvic (good) in nature, being the soul of all things.

It represents the right eye, which is again the same as in western astrology. It represents half a year. It rules the heart and the eastern direction. It also rules the brain in the human body. It rules the summer. Rudra and Shiva are considered to be presiding deities of the Sun.

The greatest difference between the western and Vedic astrological conception of the Sun is that in the West it’s viewed as a benefic, whilst in India – as a malefic, though some Vedic astrologers disagree with this classical view, arguing that that which gives life to the world cannot be malefic.