Neptune is the second furthest planet from the Sun. It was discovered in 1846 while in the sign of Aquarius, but it was known to the ancients by its vibrations. In the book to come on Egyptian Tarot I will explain how the information about Neptune is found in the tarot system as believed by some hermeticists.

Trident of Poseidon (god of the sea) is used as a symbol for Neptune.

Jupiter is now considered a co-ruler of Pisces by western astrologers, and I think it’s very wise to look at the placement of both of these planets when analyzing the natal chart.

Neptune is the ruler of the twelfth house, responsible for pre-birth traumas, self-undoing and secret enemies. It’s one of the mystical houses in astrology.

People having many planets in this house will feel very limited and may be true rebels, trying to escape the feeling of incarceration.

Neptune travels through all the zodiac signs in around 165 years. He spends around 14 years in one zodiac sign, making such a transit feel quite permanent. This planet rules everything relating to water, especially the sea. It’s the planet of dreams, illusions and fantasy. The planet’s influence tends to make things look mystical, and sometimes it distorts the true view.

If found close to the ascendant in the persons’ natal chart, it gives dreamy, mystical eyes as I mentioned in the article about the first house of astrology. It’s the planet of creative people which governs fine arts. It’s the higher octave of Venus. It’s also the planet governing medicine and drugs, as well as other mind-altering substances. It’s the planet influencing our subconscious minds.

The influence of Neptune

Neptune can influence one to climb the steps towards spiritual evolution, and its negative influence may make the person a substance addict. Thus, it can either give true enlightenment or addiction to altered states of consciousness and eventual self-destruction.

A person with a strong influence of Neptune, or the one born under the full Moon, will be an easy subject for hypnosis.

People with a prominent Neptune can be empaths.

The person ruled by it can become a sponge to all thoughts and emotions around him, which can drain him and make him emotional.

The person who has strong Neptune in his birth chart will definitely be very sensitive to his environment as well as to people.

Some loners have strong Neptune in their charts because they choose to isolate themselves from the society rather than feeling discordant vibrations all the time.

The planet Neptune doesn’t acknowledge borders; thus, when Neptune is strong in one’s chart, borders between person’s as though don’t exist and the native may get feelings that are not his own but someone else’s close to him. So people who, for example, feel sad for no reason after spending some time with others, may feel so due to the neptunian influence.

Neptune – the planet of illusion

The danger with an afflicted Neptune in one’s chart is that the person may be easily hypnotized, get into religious cults, have deceptive astral visions, and be deceived by spiritual charlatans.

Neptune rules the movie industry because they sell illusion.

Since Neptune is the planet of illusion, it also rules the media.

Television projects images that are not true; we are sold ideas through the media that might not correspond to the reality; the entertainment industry sells us something that doesn’t exist.

Beautiful illusions can serve as inspiration and motivation, but if mistaken for reality, it can result in unhappiness and deception.

The position of Neptune in the astrological houses indicates how a person expresses his mystical potential. It also shows through which circumstances the person will be used as a channel by the higher spiritual forces. Wherever he is found, he will encourage to serve the person with an impersonal love, and thus unselfishly.

Its position shows how the person uses his ability to visualize. It shows which circumstances of life will be most affected by premonitions, dreams, clairvoyance and other other-worldly phenomena. If Neptune is afflicted, its house position as well as aspects show where the person is most prone to delusion and self-deception. He will be unrealistic about those areas.

Also, the position of Neptune usually indicates the area where one is weak, impressionable, as well as spiritually inspired. Neptune influences death by mysterious means, by drowning, disappearance or through poisoning if found in the eighth house or connected to it. 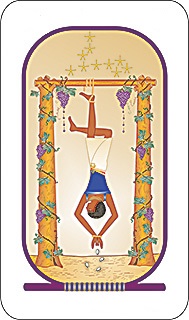 Major Arcanum XII, The Hanged Man, is ruled by Pisces whose ruler is Neptune.

The planet’s influence encourages us to take actions for the greater good of others and to be selfless.

This, of course, could be abused by those seeking individuals to exploit.

It also corresponds to the Egyptian Tarot card of a hanged man, showing the tendency to be a martyr, and the danger of being crucified for your goodness, like Jesus was (who was often associated with the fish).

Neptune can encourage people to lie or exaggerate, to deceive themselves and to refuse to see the reality the way it truly is.

Influenced by this planet, the person may feel a victim or may have escapism tendencies. The person may also get inspiration from this planet to create beautiful pieces of work, but it can encourage laziness, madness and addiction.

Neptune may make the person too receptive and submissive, and some people will feel this energy and use the person for their own ends. It’s the planet responsible for religious delusions, on a large-scale as well as in a personal life. Thus, when some religious trend picks up, it’s often caused by this planet.

Neptune’s highest manifestation is all-encompassing love that destroys all boundaries, as well as limitless compassion. However, Neptune can cause one to get lost in the spiritual world, being deceived by astral appearances and false visions. So a lot of strength, insight and common-sense is required to use the powers of Neptune to gain spiritual advantages.

The ruler of oceans and the unconscious

Neptune rules the ocean, which, in spiritual terms, is the collective unconscious. It’s associated with slavery and bondage too, due to Pisces representing such states, and its rulership of the twelfth house that is associated with confinement. Thus, Neptune can free, but it can enslave also – it depends whether its powers are used creatively, or misused through dissipation and self-deception. Thus, a drug addict may feel himself free when under the substance influence, yet in reality he’s a slave.

People strongly affected by this planet always search for something higher than the physical. They want to get in touch with other planes, be it through drugs or spiritual practices, depending on their development stage. There will always be hunger for the infinite in such persons, but the way they will try to attain it will depend on their intelligence, knowledge, experience and general development. So the persons who are drug users, occult researchers or saints all will have one thing in common – a prominent Neptune in their birth charts.

Persons who employ some element of masquerade in their appearance are likely to be influenced by Neptune.

People who wear strange clothing, paint their faces in strange ways and employ some element of masquerade in their appearance are influenced by this planet.

Those who are more developed will choose to express these unusual traits in a fertile imagination that expresses itself in paintings, or by becoming actors rather than shocking people by expressing such strangeness through their appearance.

But usually people who are ruled by Neptune like to imitate rather than create something new. There could be a shade of originality in their imitations though, some stamp indicating the imitation done by them.

People influenced by Neptune are often unreliable, inconstant and irresponsible. They are usually aware of how they make others feel but will become even stranger when some dissatisfaction about them is expressed.

The desire for travel

Also, Neptune, like the Moon, encourages restlessness. The person influenced by this outer planet will tend to wander and be discontented with his place of living. The body of a neptunian is often frail, the character may be weak. He lives on his nerves. His soul is strong but the body usually cannot bear that much energy going through it, so this sometimes results in a nervous breakdown. Staying in a peaceful place with lots of rest restores such persons.

If a person cannot pick up finer vibrations of Neptune, he simply becomes an unrealistic dreamer, getting only its lower influence. He then may be lazy, secretive for no reason, and escapist. Neptune feels constrained by earthly responsibilities and dislikes difficult work. Also deception, fraud and destructive self-indulgence may be engaged in.

Neptune destroys the boundaries between the spiritual and the physical, and thus enables to receive messages from beings residing on other planes. It also allows one to merge with the rhythm in dance, or through meditation to become one with the thing one focuses on.

(As with all outer planets, it’s not that they are negative, but because they have higher vibrations, most people cannot handle their positive other-worldly influences and revert to their negative influences which have lower vibrations. For awakened people living spiritual lives the three outer planets are not malefics.)

Herbs, plants and trees: Neptune rules plants that are used as intoxicants.

Professions: occupations related to the sea, like fishermen or people working on boats; those who work with fish; actresses, occultists, dancers, musicians, magicians, workers at isolated places such as hospitals, universities, covenants, mental institutions and prisons. Charity workers, chemists and those who work with poisons and medicines are also ruled by this planet.

Neptune rules the pineal gland and the unconscious mind. It gives ESP.

That’s all the information I have for you about Neptune, and if you have some more insights to share about this planet, please leave a comment below.