In this post I’m going to analyze the natal chart of Harvey Weinstein.

Pobably you know who he is but just in case you don’t, he was an American film producer. He and his brother co-founded the entertainment company Miramax.

In October 2007 following sexual abuse allegations against him he was dismissed from his company and expelled from the Academy of Motion Picture Arts and Sciences.

Around 90 women came forward with sexual abuse claims, yet who knows how many in total were assaulted.

Some women who accused Weinstein of sexual misconduct

Currently he is not in prison but he may still go to jail. His millions of dollars definitely help him, but the amount of hatred that’s directed at him to the point that he goes into hiding is pretty much the same as being in jail anyway. 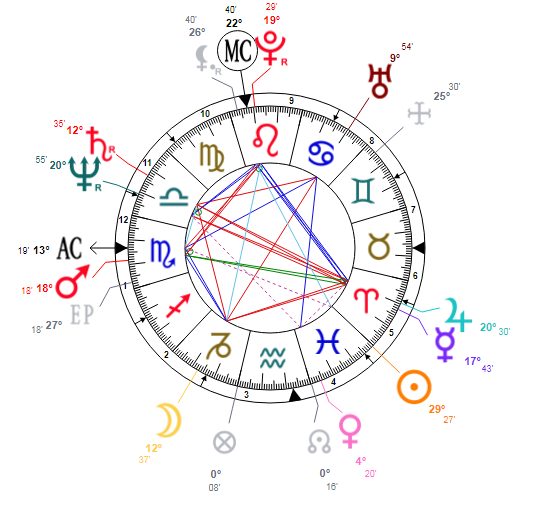 Harvey’s birth time is not certain but I think this chart is right for him – it would suit him perfectly, so I assume this is the correct birth time.

We see that his ascendant is in Scorpio and it’s very strong. It’s energized by Mars, and Mars is an old ruler of Scorpio. It’s very strong in this sign so Harvey’s energy could have been very investigative and intense but in a good way.

Instead, he misused the energy (also considering that this planet makes a negative aspect with Pluto) which made him very dominating, not considerate of the wishes of others, but trying to get what he wants at any cost.

This is what the square between Mars and Pluto does, but stars don’t force people to behave according to their natural inclinations and we have conscious minds and willpower to change even the worst star-indicated aspects. Unfortunately, Harvey gave into the lowest karmic impulses that are shown in his chart.

Harvey’s mother was a businesswoman, like it’s shown in his chart.

We see that his Moon is in conjunction with Chiron. This asteroid represents our wound, and it could mean in Harvey’s case that this wound had been inflicted by his mother.

Considering the sign that the Moon is in (Capricorn) his mother could have been businesslike and unemotional; someone very strict and demanding.

Some say that’s a bad place for the Moon, but I don’t see it in this way. The way that I understand astrology is that nothing is really bad or good, it all depends on what you do with those potentials and inclinations.

For example, someone with a strong Scorpio influence can be totally ruthless and dangerous. Yet those who develop their personalities can become excellent investigators, doctors and mystics.

So it just depends on whether you’re raising your vibration and you’re developing yourself to access higher energies of stars and planets or not. So the same applies to the Moon in Capricorn – it could make people very selfish, unfeeling and minding only their own well-being; but it can also make people highly intuitive about business and very resilient – able to survive and even thrive in very bad conditions.

But since his Chiron conjuncts the Moon, I do think that there may have been some sort of trauma inflicted by his mother, and that could be the reason he has so much hatred towards women, trying to demean as many of them as possible.

Rose McGowan, pictured with Weinstein, made rape allegations against him.

By looking at his twelfth house it’s obvious that he’s repeating the same mistakes that he did in his past lives, as it is shown that he was abusing his creativity, power, justice, beauty and sexuality. He might have also abused spiritual powers.

When it comes to beauty, Saturn sits in the sign of Libra, giving him no beauty at all unless he masters what Saturn governs by being kind to others and appreciating the beauty rather than trying to destroy it.

I’ve read interviews where Harvey’s early friends revealed that the reason he needs to be seen with and to use so many women is to prove to the world how charming and desirable he is, and this, of course, comes from inner insecurity about his looks and worth. 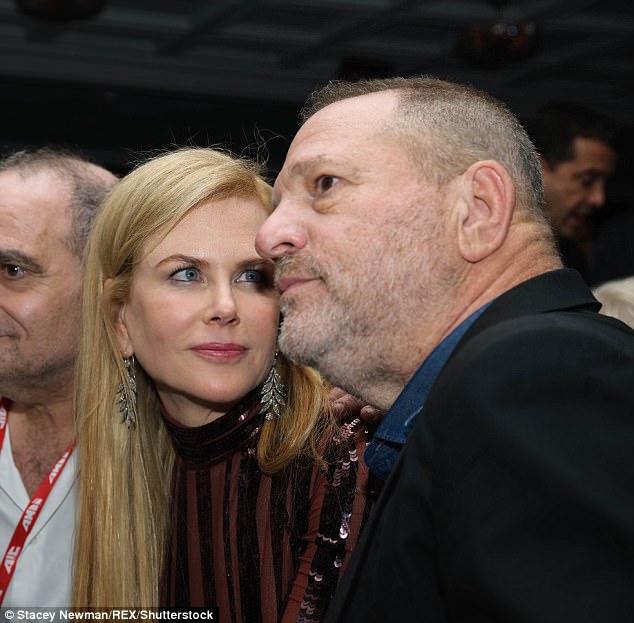 Harvey’s friends told that he felt deeply insecure about his looks so by having many women he tried to prove to the world how desirable he was.

We can see that his Part of Fortune is at zero degrees Aquarius which is a powerful degree and it means that his ability to earn wealth lies in his efforts to express himself in business environments as well as when it comes to doing something that is modern or advanced.

That’s exactly what he used to do – he was working in the movie industry and that’s not something that is ancient; it’s a relatively new phenomena, so he was able to succeed in exactly the way that it was written in stars for him.

Harvey became a billionaire through building and maintaining an innovative and creative movie business, and that’s exactly the kind of activity that is shown in his chart to bring wealth. Should you wish me to check what brings wealth in your particular case, let me know about this if you order any of the life assessment options.

Harvey with his wife – his chart shows his purpose in this life to be focused on family matters.

We can also see that his north node lies in the fourth house at zero degrees Pisces, which means that one of the lessons in this life is to focus on becoming a more spiritual person at the core, to resolve core issues and become a family man more than focusing on one’s career.

However, he failed to accomplish this – he continued to act the way that he acted in his past life, according to astrology. After the age of 30 usually people intuitively feel what life calls them to do (the north node) but the impulses coming from his past lives were so strong that they kept him going as though on auto-pilot, unfortunately.

We can see that his Venus is in her exultation in Pisces but unfortunately this person was unable to access its higher vibrations. He’s lost in sexual fantasies rather than developing his gentle and spiritual loving side.

Paz De La Huerta – another actress who accused Harvey of raping her.

His Sun is at 29 degrees Pisces. This is a very dangerous astrological degree and it’s very difficult to activate its positive influence of higher creativity. This particular degree aligns with the Scheat star which is one of the black malefics together with the Markab star.

Inability to tell fantasy from reality

His Sun is unaspected, making all the characteristics of this particular placement magnified, and it also gives a strong need to draw attention to oneself. Indeed, people who know him say that he has a giant ego.

Pisces suns can be very creative but also deceptive. Harvey’s victims would tell that he had hypnotic and persuasive powers – some felt as though paralyzed in his presence.

This particular star influence can make people very creative, but in this particular case he accessed the lowest forms of creativity, being lost in his own created world, thinking of himself as untouchable.

According to this source, Harvey repeatedly requested Aishwarya Rai’s manager to leave them alone, which she refused probably for the sake of Aishwarya’s safety.

According to his astrological profile, it’s very likely that the borders between reality and fantasy pretty much vanished, making him believe that he could do anything he wanted without this having any negative effect on him.

He lived in his own created world, probably seeing other people only as parts in his life movie rather than creatures with wills as independent as his own.

His Pluto is conjunct the Midheaven which makes this planet powerful and in his case Pluto governs also not only the way that he understands spirituality, education and long distance travels but it also influences his public image.

The abuse of power

(Watch from 3.13 mins to hear what Rosanna Arquette has to say about how widespread such mistreatment of women is in Hollywood.)

We can see that his Pluto is in Leo which is about creativity, free time activities, children, fame and art. So this is the right sign for Midheaven to be located in in his case, as he was a film producer.

Pluto indicates where there’s a possibility to misuse power, and he indeed misused activities governed by the sign Leo. Leo also governs love affairs, as it’s the ruler of the fifth house.

Pluto conjunct Midheaven often gives downfall as a result of power abuse or sometimes because it’s written in the stars and can’t be changed. So it’s sometimes up to you how you will use that fall – it happens for soul’s growth though it’s painful. It could teach people to be more humble and compassionate, for example.

That’s what impersonal planets (Pluto, Uranus and Neptune) sometimes do – they give events that can’t be avoided and that aren’t pleasant, but they are necessary for the development of your soul.

This, of course, greatly applies in this case, because should he have not experienced such a downfall, probably there would be zero chances of him becoming more aware of the reality of his actions and what they did to others. I’m not saying he truly regrets, but he’s more likely to regret than if nothing of the sort would have happened.

Another alleged victim claims Harvey was bragging about sleeping with Jennifer Lawrence and this enabling her to win the Oscar. So far Jennifer denies such claims.

His Lilith also conjuncts the Midheaven which can show delays to do with the areas that Leo governs, but Lilith also gives temptations to abuse what the sign she’s placed in governs. Harvey gave into those temptations as he was abusing his fame, power, creativity and love.

Failure to get Saturn’s blessings

Harvey’s Saturn is in the eleventh house which is about friends, so it might mean that he has very few real friends but the ones that he does have will stay with him pretty much for life. It means that his friends are likely to be old people or those in high authority positions.

His Saturn is in its exaltation in Libra but it’s totally afflicted, making Harvey very selfish not only in the way that he things but in the way that he acts too. He may be very unpredictable also. He gives to the world only to get something in return.

Saturn gives only the things that it governs after much hard work. Since Harvey didn’t try to develop the areas of life that Saturn governs in Libra (harmony, relationships, beauty, art), he did not receive them (he didn’t look good, nor did he have harmonious relationships, and neither do I believe that most movies of today are in any way a form of art).

Adding Neptune to this mix, the way that he understood those areas of life might have been extremely distorted.

If we simply look at chart aspects as a whole, we see many challenging combinations. We see that he came into this life with a heavy karma and did nothing to resolve it. Now he’s punished for that.

His life isn’t over yet and maybe he will learn from his mistakes. But so far we are not seeing this to be taking place.