In Astro.com we can see that the birth time of Oprah Winfrey is very likely to be accurate so we have a correct natal chart.

Though her ascendant is at 29 degrees of Sagittarius, and this anaretic degree gives the change of mind at the last minute, and I don’t see that in her life so maybe it’s 28 degrees or something like that – but I do believe it’s the Sagittarius that is her ascendant.

Sagittarius makes people lucky, and her story is definitely what people would consider lucky. From poor beginnings she has built her own empire.

For people who are not familiar with the deeper astrology, I should add here that it’s important to know your ascendant . It’s like your second main sign and you should check which ascendant you have by entering your birth time and other details in astrology websites such as astrotheme.com and then looking at what sign is ruled by the area on the left of the chart which is shown as “AC”.

It shows which sign rules your outward behavior, so it’s very important to know it because you will understand so much about yourself if you do.

The influence of Sagittarius

Sagittarius is Oprah’s natal chart ruler, and it’s about religion, education and learning; it’s the sign of a life-long student and teacher. Oprah is indeed a teacher, she always thought herself to be one, and from her current interviews and speeches that is very obvious.

People usually crystallize into their ascendant sign features as they age, and I see this happening to Oprah a swell.

Also, Sagittarius people often gain weight because they are naturally expansive in all ways, as Sagittarius is ruled by the planet of expansion – Jupiter. Since her Moon, representing the body, is placed there as well, no wonder it’s hard for her to lose weight.

Her Moon in Sagittarius also makes her very individualistic, freedom-loving and not being afraid to try out new things. Oprah is indeed courageous – she started her own television network, and she didn’t even get discouraged when it went all wrong, but she kept herself under control and then turned the matters round.

This is a characteristic of Sagittarians, who are highly optimistic, and will remain so in the face of obstacles that would be perceived as insurmountable by others. They are rarely depressed unless there’s some heavy malefic influence in the natal chart that outweighs the benefits that Jupiter gives.

In her interviews she sometimes talks about her almost growing up in a church – she was there so often in her childhood. Again, that’s characteristic of Sagittarians, as the sign is ruled by the planet of religion. And even after she left home she always had spiritual values – they just shifted.

The danger with Sagittarians (whether Sagittarius is the Sun sign or ascendant) is that they may get into ideologies that aren’t true. They are at risk of getting seduced into cults of all sorts, and Pisces are at such risk too. There’s even a possibility of becoming a religious extremist, but in the case of Sagittarians they really think they are on the side of truth. So this is something to be aware of for anyone with a heavy Sagittarian influence in their charts.

Sagittarians sometimes like to live in concepts rather than being grounded in what is. However, since Capricorn, an earthy sign, is in Oprah’s house of self too, she may be more balanced in this regard.

She has intercepted Capricorn in her first house which gives much ambition, patience, persistence and business abilities. Her North Node is there as well, showing that in this life she needs to develop capricornian skills, like putting herself first.

And she did so, because she told that before she used to be a people pleaser, and only later learnt to firstly take care of herself and then to take care of others. So knowing that she learnt this lesson, and that she became a successful business-woman (another capricornian trait), she has learnt the lessons that the Universe had in store for her.

The conjunction of Sun and Venus makes people into people pleasers sometimes. People who have this conjunction often want others to perceive them as lovely individuals, so sometimes they may go out of their way to please them.

Also, if the lesson of putting yourself first is not learnt, it’s possible to fall into the trap of someone who is mentally strong and controlling, and it could be very difficult to get out of such an unhealthy relationship.

Does she tell the truth?

But it’s possible that in a smaller degree even now she may try to please people. For example, Kitty Kelley, the author of her unofficial biography, claims that she has sources that told her that those who know Oprah know that she lies to the public.

Her Neptune is in an important position, close to the midheaven in the tenth house, the position which can indeed give fame. It’s connected with Mercury, which sometimes gives preference for describing that which one wants to see rather than that which is real. It’s a very creative aspect so this truth-bending is not done with any bad intention in mind, but it’s truth-bending nevertheless.

And although Sagittarians love truth, that’s how these opposite aspects manifest. Yes, she loves truth, but when it comes to responding to the public and talking, sometimes her sensitivity to what the people want to hear can make her embellish it.

Neptune in such a position also gives her high sensitivity at work, intuition about the kind of people that she’s supposed to surround herself with, and intuition about the feelings of the public. Therefore, she is able to pick up vibrations from her viewers and adjust her speech for maximum impact.

Neptune can also make the areas it governs or aspects invisible to the person, so she may not even realize that she’s doing the truth-bending.

Her second house is highly energized with three personal planets. From the type of planets that she has there it means that her finances are a priority. Wealth is very important for her self esteem.

She feels at ease and peaceful when she’s financially secure and since she has Venus there she can give expensive gifts to people that she likes and to buy things she finds beautiful and pleasing.

Jupiter is also connected with her Sun in the house of wealth, making her lucky in finances. She can earn a lot, and then she can spend a lot also, due to the expansive influence of Jupiter and the indulgent and cash-bringing Venus. Both of these planets influence her house of wealth, and these two bring most wealth out of all the other planets.

When she’s financially secure, she feels creative, peaceful and happy, and her finances increase if she’s doing something that is innovative, something to do with technology, television included.

Radio, technology, innovations, inventions all bring her wealth, because her second house is ruled by Aquarius which is all about the mentioned subjects. The internet is also ruled by the mentioned sign, as well as electricity. So she’s doing exactly what’s increasing her finances, and she is supposed to do it, because her Sun is in the sign of Aquarius.

Her part of fortune also lies in the second house, which further energizes it and makes Oprah a money magnet.

She’s very emotional in the way that she expresses herself and she’s also emotionally hurt by unthoughtful remarks. She may be very sensitive to criticism.

Her fourth house is ruled by Aries which is ruled by the malefic Mars which is placed in the sexual sign of Scorpio, so it’s definitely likely that she experienced violence as a child, especially of a sexual kind.

Mars is negatively squaring Pluto in the eighth house, strengthening the violent and sexual nature of such childhood incidents.

She told that when she was a teenager she was promiscuous, and in some articles I’ve read it was even claimed that she was a teen prostitute. Promiscuity could be indicated by her Moon being placed in the social house (eleventh), and because of the fact that it’s connected to the conjunction of Sun and Venus.

This makes me conclude that if she engaged in a promiscuous behavior, it was in order to be popular, to be loved by others, though since the Sun and Venus conjunction is in the second house of personal belongings, maybe there were some material considerations as well.

Highly passionate energy, unusual preferences for unions and the fact that her sexual nature is strong also might have contributed to such an early choice.

Her house of unions contains a feminine sign of Cancer which is ruled by the Moon that represents women; and combined with the fact that Uranus, the planet of unusual choices and rebelliousness is present there as well makes me think that she may have attraction to women as well.

All life is about work

Gemini is on the cusp of the house of work, making her work mental, but because of the fact that Jupiter is placed there too, it makes the work of the giving, religious or educational kind.

Geminis are also good with their hands (the Gemini sign rules hands, actually) so this may indicate manual work in some charts also; but we know that in her case it’s about mental work.

Jupiter, her chart ruler, makes her generally lucky in life. And since it’s placed in the house of work, all her life is about work.

Her Black Moon Lilith placed in the ninth house (which is unfavorable for this asteroid) sometimes makes people into rebels against educational and spiritual institutions; and maybe some of that rebelliousness manifests in her in a mild manner as well, because she’s against zealous and close-minded Christians.

But mostly she highly respects educational institutions as seen from her university graduation speeches. That’s because Jupiter, the planet of religion and higher education, is her chart ruler (though it’s in its detriment).

This particular placement of Jupiter, however, encourages a superficial as well as eclectic interest in religion. This particular influence also makes one mentally restless and changeable. In developed types this very placement can make one into a spiritual genius, but usually it makes a person into someone who can entertain with their knowledge of spirituality, but it’s rather superficial.

It also gives strong humanitarianism which is engaged in because the person mentally knows it’s the right thing to do, though not necessarily feels it; though in Oprah’s case she may feel that as well, as her self-expression is ruled by the emotional sign Pisces.

I want to keep this piece from getting too long, so I will end it here. If you have any other observations that you think are important to add, please do comment below. 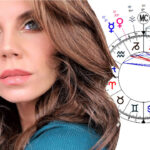