My Experience of Meditating Twelve Hours a Day

I’m writing this piece from the very same temple where I’m doing twelve hours of meditation a day. Today is a Buddha day, and the nun responsible for foreign laypeople allowed me to take it easy on this day. Thus, this is my second post I’m writing today, as I have a little more time.

Meditating twelve hours a day is stressful. Most people could not do it. In fact, from the group of foreigners that started with me, I’m the only one remaining that does proper meditation.

The reason it’s very hard to meditate for twelve hours a day is because legs and back start hurting so much that most people give up. When they give in to that pain, then the mind starts offering thoughts such as that this is pointless, that one should be rather doing something else, that it’s injurious to health and so on. And if people are identified with their bodies and minds, they quit at this point.

I saw strong men not being able to handle this, and one groaned from pain in such a sad way that I felt sorry for him (he thought he was alone in the temple, when I was meditating outside of his vision, thus he thought he was alone. Otherwise he wouldn’t have made such sounds, I assume!).

I love the fact that I am being put through this ordeal because it caused me a major breakthrough – I won over my body. Although I, too, am in pain as I meditate so many hours, I am greater than the body pain. So even though my whole body hurts, I am still able to sit still for sixty minutes of meditation, then do another hour of walking meditation, and after a short break start another two-hour session.

Winning over your body is a part of the initiation into esoteric mysteries as well. On the previous day of Buddha, when it was full moon, I was practicing very diligently whilst other people joined the procession of stupa circulambulation.

That night I got a symbolic dream and awoke from it when it was exactly twelve o’clock. When I get awakened from a dream like this, I know that I’m supposed to work out its symbols. And the symbols were so obvious that I managed to work them out quite easily.

The dream was a boon for my diligent practice. Like the time I got a dream about a spirit spouse LINK, so for the very same reason I got this dream – because I did something beyond myself. That previous time I went out of my way to help the poor, though it wasn’t convenient. This time, I practiced more than I usually do – I was diligently meditating all day, putting my best into every session.

Thus, because I was greater that day than who I am, I got a new insight. This is how you get breakthroughs, as it’s the law of the Universe. You do something that’s above what you think you can do, and you get rewarded with something greater than you currently have.

In the video above I talk about what kind of dream I got, so you can watch it to find out. I cannot detail it here because I’m really tired from meditation so I’m going to keep this article short and to the point.

Apart from getting a clearer insight, this meditation also makes my mind sharper. I hope to write a separate article on the meditation technique that I’m practicing here, as it’s not a usual one. I like it because it, as I said, sharpens the mind, and I believe this is the very mind training which later allows people to push external objects mentally.

My assertion on object pushing isn’t groundless, since my dear teacher (a monk) showed off his ability when we were talking, and it was impressive! I love those moments with monks where we show off our abilities whilst others don’t even get a hint what’s going on! There can be so much taking place without even one word said.

It’s not that the monk pushed any external object, but he compressed his huge electromagnetic field to give me a push with his vision. That was very impressive!

(*Note: as I’m revising this article at the very end of a month of meditation in this temple, I also got the experience of another monk an making eye contact with me whilst in a conversation to check on which level I am. It turned out we were both on a similar level, because that spiritual contact was established for information transference. I chickened out by turning away the glance because I’m a celibate woman and I did not feel comfortable keeping an eye contact with a celibate male monk for such a long time. I think he understood.)

And it’s not only because of such impressive feats that one should do such mind-training, but a sharp mind is useful in so many other ways. You become a better-functioning and much more aware human being when the mind is sharpened like this.

Another benefit of such an arduous training is that I have to remain present the entire day. This is a perfect mindfulness training, and some spiritual powers are developing as a result of that. I got impressive results and some monks could not believe that a foreign non-Buddhist woman has such powers; but I’m not going to reveal what those powers are because it’s not a topic to promote publicly.

I just told about this to encourage you to continue in meditation. It can be any sort of meditation, as long as you don’t identify with your thoughts and as long as it’s not a new-age guided meditation which does nothing to train the mind.

Also, different forms of meditation will give you different results. For example, when I was doing meditation on nothingness – by being present and not being carried away with thoughts – I developed an ability to detach my consciousness from the body and make it limitless or compress it to experience the life of a sound particle or any other being.

Also, meditating so many hours gets my mind into an interesting state where it’s very alert yet relaxed. I even experienced an incredible development of being aware of everything that was happening around me moment after moment, which was absolutely incredible.

The downside of such long daily meditation is that it’s stressful. I’m so happy to have been allowed to relax today. Sometimes the mind finds it difficult to switch off and go to sleep; it’s not that it’s thinking, but it just would not allow me to sleep. It’s very strange. When this happens, I need to almost self-hypnotize myself to be able to sleep. Thank God for my self-hypnosis training.

Also, I find that I’m sometimes irritated by small things, and I believe this is due to the stress. I find myself getting slightly upset when ignorant people disturb my, as well as of others’, meditation. For example, there is a woman who looks spaced out and she never closes the temple net door when she leaves. This allows mosquitoes to fly in and, of course, it’s not pleasant to feel yourself stung. So I find that things like this get me irritated, though I’m trying to counter it by wishing her more awareness rather than thinking negatively about her.

All in all, I’m very grateful for the monk who, despite of his inability to speak English, gave me the name of this monastery, and that’s a story by itself. I am learning here so much. The greatest achievement of my stay here was that I managed to win over my body. If you remain undisturbed by body pains, you can be happy no matter in what state your body is. This carries over into other areas of life and you become the master of yourself. Thus, no matter what life throws at you, you can remain a happy human being.

Once I leave the monastery, I am probably headed to the last one for a few more weeks. After this, I hope that I will be able to write much more about my experiences here as well as the meditation technique.

However, there are many new developments happening in my life so I apologize for the shortness and reduced number of my posts. This year and maybe even the next is going to be very intense for me, but the developments are very positive and I know I’m exactly where I’m supposed to be.

I hope that this article encouraged you to start or continue your own meditation. Also, it’s not meditation alone that gives spiritual powers and insights, but when it’s coupled with righteousness. This is a powerful combination that gives sure results.

The Sun Behind the Sun Book Is Now Released! 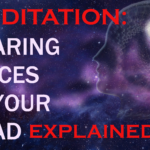 Hearing Voices in Your Head During Meditation Explained

Meditation Technique to Sharpen Mind and Get into Deep Meditation