Touching the Void in Meditation Explained (Being Sucked Into the Abyss)

It’s interesting that when people hear about the awakening story of Eckhart Tolle, they tend to miss a very tiny section of it which he always mentions – that he was sucked into the void just before the awakening.

He told that the experience was so frightening that it could easily be compared to death. But since he was intending to take his own life due to his depressed state anyway, and because there was the inner voice telling him not to resist the experience, he didn’t.

So he let go, and the void sucked him in.

He could not remember anything that happened after that experience.

The next morning he woke up liberated.

He talks about the void experience in this video (the video will start from around the time he talks about being energetically sucked into the vortex of energy):

My personal experience of being sucked into the vortex

The void experience happened to me twice. Unfortunately, having no information about this state whatsoever, I was completely unprepared. So I resisted being sucked in both times with all my might.

The first experience of abyss happened in the year 2012, at the time when people thought the world would be over. I think that particular time was very helpful for the awakening, and it could have signified the world as we know it being over, rather than the literal end of it.

The second time this energetic experience happened a few years later, and again, it scared me to death.

When I shared this experience online, I only got one reader’s feedback who also experienced it and resisted it with all his might as well. But it turns out the opposite should be done, as seen from the case of Eckhart.

So we can assume that this state is likely to come when you are deeply relaxed as well as not thinking about anything.

This state is an invitation to turn you inside out, for you to be put the right way. Unawakened humanity operates through the ego, but once this experience happens, you operate as the consciousness that you are.

After this experience, Eckhart said his ego died. Maybe that’s why when the void experience happens you feel so mortally afraid – because a part of your indeed dies.

It’s very difficult to describe this experience for those who never had it. It’s like your whole being is threatened to be sucked into the depth that’s in you. I don’t know if I explained it properly, but I can’t find better words.

You know that the depth is endless, thus this experience can also be called “being sucked into the abyss”. It feels very physical, but, of course, it’s an energetic experience. I believe that it happens to people who are ready to let go of their ego identity completely.

However, since real spirituality has almost no “manuals”, so to speak (New Age fluff doesn’t count), people who have this special invitation usually miss it as they are totally uninformed about it.

So now you are. In case this happens to you, just relax and let go.

I warn you, however, that it’s much easier to say this than to actually do it. It really feels like you will die. It either takes a person totally frustrated with the ego, or a fearless one to take this plunge.

Even if I get this experience again, I cannot guarantee if I would give in. But I think that I will. What do you think you would do?

Have you been touched by the void? Do you know more information about this experience? Do leave your comment below. 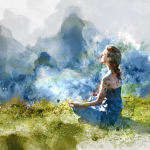 The Sun Behind the Sun Book Is Now Released!