From reading the first review and reflections on Isis Unveiled you may have come to the conclusion that I entirely support the views of H. P. Blavatsky. This is not the case.

There are some things I definitely disagree with her, and this article will be dedicated to the things that I disagree with in Isis Unveiled and her opinions that widely differ from usual views.

I don’t mean to say that Blavatsky tried to deceive people – she might have really thought those things to be true. And who am I to say that I have the truth – I’m simply stating that I disagree with some things that she said. 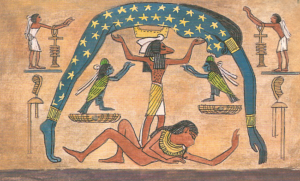 There are many theories about the shape of the firmament and the earth.

Looking at ancient cultures it seems that most of them believed the firmament to be round and enclosing our flat earth.

Many old cultures portrayed the earth as having four corners, so it might be a circle within the square, which is a shape of deeply esoteric meaning.

Flat earthers believe that the sun goes round parallel to the earth disc and it creates an optical illusion of rising and setting because of the size of the plane as well as itself. Interestingly, ancient cultures did not picture it this way. They believed the sun to descend to the underworld for twelve hours and then emerge again.

Sun god Ra travelling by boat through the underworld

We find in Egyptian myths the sun going down to the underworld and being dragged in a boat by other beings through this dark place.

Whilst it’s there it gives light to its inhabitants for twelve hours.

In the books of Enoch we find the sun leaving through the windows of the firmament and then coming through them the next morning.

Now we know such sun movements to be not true, since we are aware that when it’s night in one part of the plane it’s a day in another.

H. P. Blavatsky claimed that some of the initiates knew that the earth is a globe and that it spins around the sun. She told that they disclosed this knowledge only in symbolical language for the fear of getting burnt or murdered in any other way for saying such truths plainly to the ignorant society. I cannot deny or support this claim since I haven’t seen such writings.

Blavatsky had a very interesting take on evolution. She definitely disagreed with Darwin’s evolution theory (which she knew that it wasn’t any new theory but was taken from ancient philosophers). She believed in evolution, but not in the Darwinian evolution.

From reading Isis Unveiled so far, it seems that she believed that the soul itself goes through different experiences of being a mineral, plant, animal and human; though she did not believe that the physical mineral can change into a plant and plant into an animal.

She also believed that man at first existed only as a sort of astral being but then the “fall” happened and he became more and more physical – and now we are totally trapped in matter.

I need to read more of Blavatsky’s writings to really understand her take on reincarnation. From what I’ve read so far, I believe Blavatsky did not support traditional reincarnation views. She believed that a person cannot become a human being again after death, unless he died an infant without experiencing what it’s like to be human and developing human attributes.

Therefore if the infant’s life is cut, he may return again. But in vast majority of cases, according to H. P. Blavatsky, souls don’t return to the same type of existence, but move on to other experiences.

Blavatsky explains that the reason people experience visions from past life is to do with accessing the astral record of collective human experiences. I need to read more of her works to really understand her views of this subject, but that’s about what I got from reading her works so far.

Some of her Bible interpretations are very eye-opening; I love reading her take on Bible verses because she comes from a totally different background so it’s as though I’m seeing the Bible through another person’s eyes.

Some of her interpretations are right on point and I got myself saying several times “How come I never understood this verse in this way before? It makes much more sense.” It seems that it was so easy for her to see the real meaning of obscure Bible verses – I guess that’s the mark of an initiate.

However, some of her interpretations – and that’s my own opinion – seem to be stretching it too far. For example, she explains that the words “suffer a witch not to live” actually meant “do not allow a person to make a living by being a witch”. She claims that Israelites took it too literally and actually killed witches.

I’m not saying she is wrong – I would have to consult an unbiased Hebrew scholar to affirm it for sure. But at the moment I think such interpretation isn’t right.

So these are the four subjects which I either understand differently from the way that Blavatsky does or find her views very different from the popular (Christian or pagan) opinion.

As for her understanding of things astral, various spiritual entities and how spiritual phenomena happens, I find her explanations making much more sense than the ones offered by Christians or spiritualists who aren’t initiates.

Also, her theories of how pyramids were built are also much more sober than the information we hear from archaeologists or internet conspiracists of today.

But such subjects will be treated in the next post.